Blog - Latest News
You are here: Home / Definitions / What is Nuclear Safety ?

Thus, from the Safety Glossary of the IAEA (International Atomic Energy Agency), Nuclear Safety is the achievement of proper operating conditions, prevention of accidents or mitigation of accident consequences, resulting in protection of workers, the public and the environment from undue radiation hazards (Terminology used in Nuclear Safety and Radiation Protection, 2007 Edition).

In nuclear industry, safety is distinguished from two other important and complementary concepts:

After defining the objective of Nuclear Safety, we will focus on the particular approach of Defense in Depth and end with the Fundamental Safety Principles of the IAEA, which will then lead us to the Frame and Regulatory Requirements for nuclear safety solutions.

According to the Fundamental Safety Principles of the IAEA, the fundamental safety objective is to protect people and the environment from harmful effects of ionizing radiation.

To ensure that facilities are operated and activities conducted so as to achieve the highest standards of safety that can reasonably be achieved, measures have to be taken to:

The fundamental safety objective applies for all facilities and activities, and for all stages over the lifetime of a facility or radiation source, including planning, siting, design, manufacturing, construction, commissioning and operation, as well as decommissioning and closure.

Eventually, it applies to all operating conditions, from normal operation to the management of radiological emergencies.

Defence in Depth is originally a military concept.

Against a given threat, since no single defence is infaillible, the idea of Defence in Depth is to stack several independent levels of defence.
Each level is designed to prevent so far as possible:

The training courses given by SureDyna include a complete presentation of Defense in Depth as well as its applications to design and operation of nuclear reactors and nuclear facilities.

Meanwhile, three basic levels of Defense in Depth should be remembered:

The best-known application of the Defense in Depth concept is the three containment barriers of radioactive materials around the core of a nuclear reactor:

However, although this example of defence in depth is excellent and rightly the most cited, it must still be considered as an instance of application of the concept of Defence depth, not as Defense in Depth itself.

Indeed, the barriers do not match the levels of Defense in Depth and should not be mistaken for them.

According to the different levels, the Defense in Depth approach defines categories of normal or abnormal operation situations (incidents and accidents) with associated means of design and operation (redundant equipment in case of failure, backup devices, specific procedures, etc.).
The requirements with regard to a given situation are all the more strong as this situation is likely to occur more frequently, as shown on the so-called “Farmer” diagram. 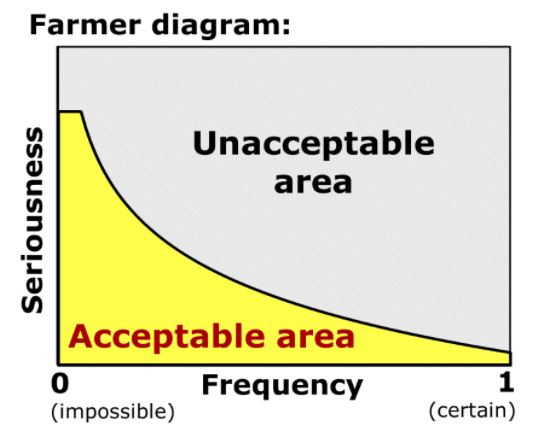 In any case, the levels of Défense in Depth must be independent in order to respect the Single Failure Criterion:
A single event (incident) of a given category shall not generate an event of a higher category without other events occurring independently.

Want to join the discussion?
Feel free to contribute!

What is Nuclear Safety ?